CWIS In The News

CWIS, a Colorado Springs real estate appraisal company, has jumped into the middle of the biggest housing market boom in the country — foreclosures.

The company, that just one year ago had only three full-time employees, won a five-year, $50 million contract last summer to manage and maintain homes for the U.S. Department of Housing and Urban Development.

That contract set the little company on the fast track toward growth — it hired nearly 30 full-time staffers and hundreds of independent contractors and opened offices in Indiana and Georgia.

The company’s president and CEO David Ramagos said he’s not slowing down any time soon. CWIS expects to bid on a federal disaster inspection contract and a similar HUD housing management contact by year’s end.

“We’ve weathered the storm on this contract,” he said. “We can do it again.”

During the fast pace of managing 3,000 house inspections per month at CWIS offices in the Plaza of the Rockies downtown, David and his wife Carolyn Ramagos, CWIS vice president and CFO, often stop and ask themselves, “How did we get here?”

It wasn’t luck. It was years of laying groundwork, they said.

David retired in Colorado Springs from the U.S. Air Force and bought a small real estate appraisal business in 1994. In 1997, the company changed its name to CountryWide Inspections Services, or CWIS, and expanded its services beyond Colorado.

“I found out there was a great deal of government work available for property inspections,” David said.

From 1997 to 2001, CWIS completed 3,000 housing rent determination surveys for the U.S. Department of Interior. The work led to more government contracts including working for the Federal Emergency Management Agency to inspect disaster areas, work that helped determine federal aid to repair or rebuild property damaged by disasters including tornadoes.

In 2004, CWIS won a $6 million HUD contract to perform inspections on properties and help get them in sellable shape. In five years, the company completed 30,000 inspections.

When the housing market went south, HUD found itself with a growing inventory of homes — those with defaulted loans backed by the Federal Housing Administration. When CWIS was awarded its housing maintenance and management contract last summer, HUD reported that it had 44,000 homes in its inventory, which are divided into several regions across the country.

CWIS was one of five companies awarded the HUD Management and Marketing contracts in the Georgia and Florida region. Florida has the third highest foreclosure rate in the country –one in every 396 housing units. Managing foreclosed properties is a lucrative trend, but a sad one, David said.

“You see these gorgeous big homes with pillars out front — I mean families moved into them with thoughts of raising their families and having Christmas with their grandkids . . . it was a dream for them and it’s gone,” he said.

From the Colorado Springs home office, David and Carolyn dispatch inspectors to the HUD homes to inspect the property, clean it, winterize it, repair any damage and keep the yard maintained.

For HUD, the efforts are meant to help resell the properties.

“It is critically important that the FHA successfully and efficiently sell its inventory of these properties,” said HUD secretary Shaun Donovan. HUD does not want to own a real estate portfolio, Donovan said.

For its part, CWIS is managing about 2,300 HUD-owned homes. It’s a number that was drastically underestimated in the bid.

CWIS had four months to move to a larger office, hire the staff, buy computers and find the hundreds of independent inspectors it would take to pull off the multi-state contract.

“It was overwhelming at first,” Carolyn said. “But, at the same time it was very exciting. With the economy being so bad, it was wonderful being able to hire these people.”

It was like starting a whole new company, she said. Now, the three-person team had to deal with medical insurance, workman’s compensation and a myriad of other issues growing companies face, she said.

But, the company is determined to double its size within the next year by going after more government contracts, this time in the southwestern region. HUD underestimated the amount of foreclosures across the country, which is expected to lead to more contracts going to bid even before this current five-year cycle is up, David said. 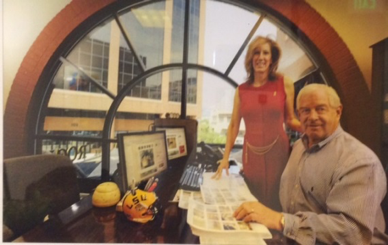